It is essential that the turbocontroller and fuel pump adjustments be made when the engine and oil are hot.
Posted by Mike Busch at 11:58 PM 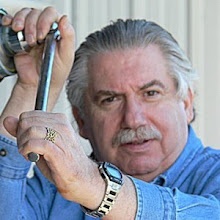